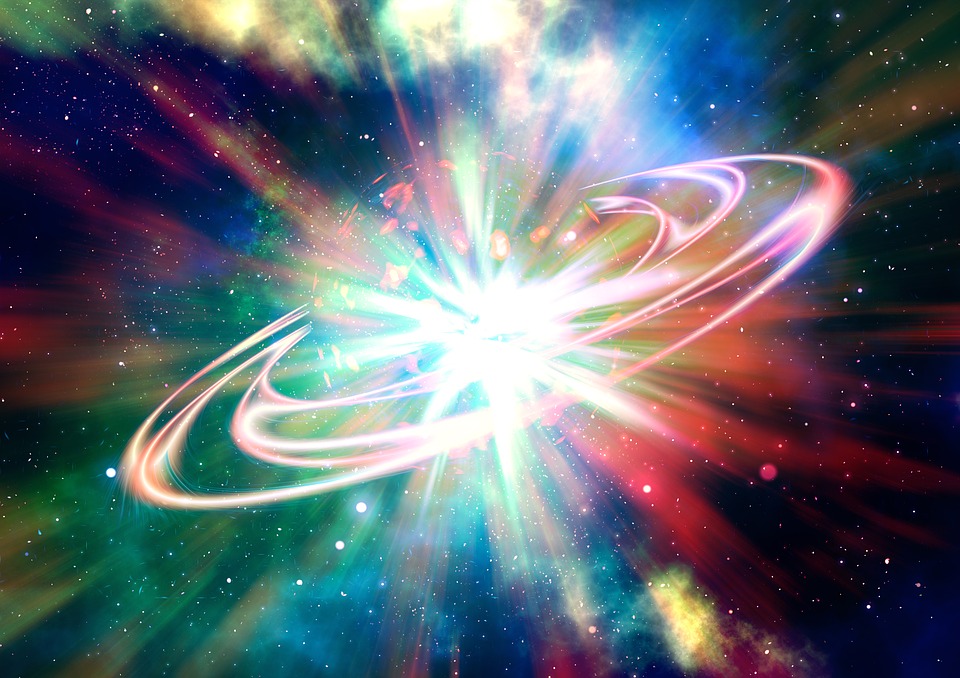 Teaching the topic of the Big Bang theory poses a number of conceptual difficulties that can be challenging for secondary school students (not to mention their teachers!). Misconceptions are not uncommon, and students can end up forming the wrong ideas.

Here’s a list of some common questions and misconceptions, followed by some arguments that can be used to persuade your audience otherwise:

1. If all galaxies are receding from us, are we the centre of the Universe?

We have no reason to believe that our Galaxy is somehow privileged in the Universe – there are literally hundreds of billions of galaxies out there. The observations made from the Earth, such as Hubble’s law, are not thought of as unique to our own Galaxy. Scientists from other galaxies would also make the same observation – they too would see all galaxies receding away from their own galaxy. Therefore, it is not that galaxies are simply moving away from us, they are moving away from each other.

2. If galaxies are moving away from each other, shouldn’t they be colliding all the time?

Nearby galaxies are indeed frequently colliding with one another. The distance between them is small (so to speak!) and their mutual gravitational attraction often brings them together in a cosmic dance. However, the only way all other galaxies outside their own local neighbourhood can end up moving away from each other, is if space itself is expanding. If the actual space between the galaxies is “stretching” and becoming bigger and bigger at a rate that is faster than their own motion within that space, then the galaxies will be “carried away” from each other, regardless of their own individual movement. It is not the case that space is “static” and galaxies are moving inside that static, permanent space. Space itself is becoming bigger and bigger, in all possible directions, carrying the things that inhabit that space away from each other. Their individual motion is not enough to bring them together, unless they are already very much close together. If the galaxies are far enough, then the expansion of space happens at a rate which is greater than the rate at which they are covering distances within that space, and they are simply carried away from each other. It’s like you and a friend trying to run toward each other starting at the ends of a corridor, but the corridor is forever stretching faster than you are covering distance. You will drift further and further apart, carried away by the expansion of the corridor, regardless of trying to run toward each other. Now take this and apply it in all possible directions, not just between you and your friend. That is what the expansion of the Universe looks like.

3. If space is expanding, are we getting bigger too ?

The expansion of space happens uniformly everywhere. But, the greater the distance between two points, the bigger the expansion. There is simply more space between them, and therefore it will increase by a greater amount. The distances between the atoms that make up our planet are negligible compared to the distances between us and the distant galaxies. To give a simple analogy, imagine a person had 1 dollar in the bank, and another one had 1 billion dollars. If banks were to declare that “let all money in your accounts be doubled”, then the first person would make 1 dollar, while the other would make 1 billion dollars. Both increased by the same percentage (100%), but the amount by which their wealth increased depended on the amount of wealth they originally had. So yes, in a way we also do become “bigger” but the scale at which that is happening is insignificant compared to the way the distances between our galaxies is growing. We therefore do not observe individual galaxies “growing” in size, but we do observe the distances between them to increase. This simple statement, that the amount of expansion is directly proportional to the amount of space between two points, is the interpretation of Hubble’s Law. The greater the distance between two galaxies, the faster they will appear to move away from each other – there is proportionately more space between them and the apparent rate of their mutual separation will be proportionately greater.

4. Can we find the location of the big bang? Can we point to the place where it all began?

This is one of my favourite questions. No, we cannot point to the place where the big bang occurred, because the big bang occurred everywhere. Let’s start with playing the film of the expansion of the universe backwards. If we reverse time, we would observe all galaxies coming closer and closer to us. But remember, every other scientist in the universe on other galaxies would also have to observe the same phenomenon. In other words, it is not the case that the Universe would be shrinking toward a unique point in space – every single galaxy would see all other galaxies approaching it. In the same way as we explained earlier that galaxies are not moving away from us uniquely, playing the film backwards means that there is no unique point in the universe that would act as “the centre of the collapsing universe”. This can only be made possible if space itself was shrinking – the galaxies would be “carried” together as the space between them shrank.

Now, imagine all those galaxies coming together and the space between them shrinking. The density of the universe would increase to a point where all matter and energy would be concentrated on a tiny amount of space. If we were to imagine that this shrinking occurred down to a point, then that point would be the progenitor of the entire Universe! The conceptual difficulty here is that this is not a point in space. It is the beginning of space itself.

There is no space outside the Universe. There is no nothingness that hosts the Universe inside it. I like to say this as “there is no such thing as nothing”. What exists, is the entire Universe and there is no space or time beyond it. The Universe is space and time together and that is what is expanding. That primordial point, the point of the big bang, is not a point in space. It is a point in a four-dimensional space-time. It can be thought of as a point from which space itself sprang out, but itself is not contained in any 3-d space. The entire universe started from that point at the same time – all points in the universe today started from that point, and stretched out from it. Every point in the universe, is, in a sense, that same point which expanded. That point is, therefore, everywhere! The big bang happened everywhere in the universe and it did not start from some privileged point in three-dimensional space.

5. What was there before the big bang?

This is another interesting question which has very interesting answers. Just like the big bang is the beginning of space, it is also thought to be the beginning of time. The question of “what was there before the big bang” is therefore similar to asking “what was there before the beginning of time?”. Some people will say that this question has no meaning – how can you define a time before time even existed? But, in my humble opinion, this is dodging the question by semantics. The question “what was there before the big bang?” need not be temporal – to which the answer cannot be “nothing”. Like Descartes said, “nothing can ever come out of nothing” (nihil ex nihilo fit) – that hot dense Universe in the beginning of space and time could not simply appear out of pure nothing – in fact, we’ve been saying all this time that there’s no such thing as “nothing”. There must have been, something. But whatever that something is, it is presently beyond the description of anything we can understand and can study using the tools of mathematics and physics. Perhaps a theory of quantum gravity might shed some light, but that is not guaranteed.

One might support a “cyclic universe” where the universe springs out and collapses back into itself again, and again and again. That, however, depends on the energy content of the universe and there is no definite evidence in favour of that theory. But, for arguments’ sake, let us assume that it was the case. So someone might answer “oh there was simply another universe before the big bang that collapsed” – so what was there before that ? “Oh, just another universe” and so on and so forth.

The simplest answer I can offer is, that is a question which has no answer in the realm of science – it is best saved for philosophy (and indeed it does have similarities to the philosophical problems of foundationalism, agrippa’s argument etc).