1. It is not hard to see that the same confusion that holds in Economicsholds true in taxation also. At the time of writing (Feb 2012), the Greek finance ministry was discussing the issue of tax reform, as the IMF was pushing for reforms that wodul bring more revenue to our incompetent government.

Sadly, the discussions taking place were on taxable bands, rates, VAT levels and on improving the repayment of citizens’ debt owed to the state by offering the option of instalments, among other things. In other words, more of the same old useless concerns. These are but modifications on existing taxes, not real reforms.

The present system of direct and indirect taxation with its arbitrary rates is, as I’ve written before, illogical and complex. It facilitates corruption (fraud, bribery etc)  while punishing economic growth by making workers who work harder and earn more to pay more tax.

This system, instead of being patched up here and there, should be scrapped and replaced by a much better, logical, transparent, simple and efficient one.

2. As I wrote on the previous article, Tax Reform – Part I , §7, this simple system was known to a few Greek freedom fighters in 1821, and was implemented starting in the spring of 1822, until, eight years later, the first Governor of Greece, Capodistria, levied an income tax using a “progressive” system of bands ranging from 10-25%. The National Fund, still in its infancy, was collecting the economic rent (the surplus over the marginal locations) from agricultural production. This idea was perhaps inherited from our Byzantine tradition (see the Agricultural Law in the 5th century or the “Solidarity” law of 996 A.D. under which taxes were levied only on the large estates that had economic rents and surplus), or perhaps from the French Physiocrats or Adam Smith (Wealth of Nations), or perhaps Thomas Paine (Agrarian Justice). 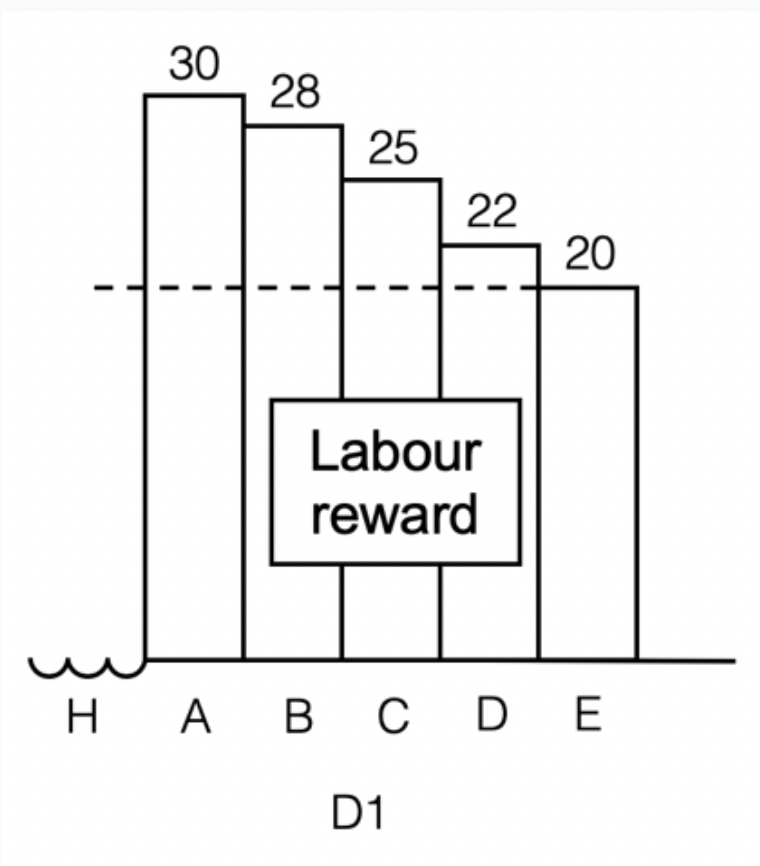 This diagram demonstrates in a simplified way the production of an agricultural community near a river or a harbour next to a river estuary. Each column represents a zone made of 10-20 farms that are assumed to be equal in size, with equal amounts of capital and labour applied to each one. It is clear that the surplus in zones A,B,C and D is due to the fertility of the soil and its proximity to a water supply (for irrigation), as well as proximity to the harbour (proximity to market and imports/exports).

The economic rent, or the public share of the value of the product (see Tax Reform – Part I §2-3), is due to the existence and progress of society in knowledge, technology, culture, transportation and its connections with other centres and economies. It is evident that without the community, the production of a lone farmer would not exceed 60 units. Moreover, if the farmers were to swap places, assuming equal amounts of capital and labour, the production on each location would remain the same. Thus, the surplus or public share of the value of the production is not due to the labour or capital of the farmers, but due to the locationof the production unit within the greater community. This is the natural state of affairs.

Since the economic rent and surplus is owed to the existence of the community and the rest owed to the labour of the individual, it is natural and fair that the surplus should be collected by the authorities  as income for the State.
3. Collecting and calculating economic rent is a simple and easy affair. In this specific example, the land values of the locations will differ according to their yield. The most productive units in zone A will be more expensive, followed by those in zone B, then zone C and D, with zone E having the least expensive value. The value of a location is proportional to its net yield or surplus (public share). In fact, today, any competent real estate agent knows the running price of a site anywhere.

If someone wished to lease a farm instead of buying it, they would be met with the same relationship in leasing rates: the most expensive would be zone A and the least in zone E. The leasing rates would also reflect the productivity of the land. If, for example, the leasing rate in zone A was 20 units, the rate in B would be roughly 18 and so on and so forth.

Let us now term the least productive zone as a “marginal location” or “marginal production”.

The state evaluators (equivalent to tax officials) would find the marginal locations, that is the least  expensive locations in use, which usually turn out to be remote rural areas engaged in agricultural activities. Very few people would be interested in leasing or purchasing those, unless they have the potential for tourist development. Such marginal locations do not have any surplus and economic rent and are not taxed. Only the ones that are more efficient and, being correspondingly more expensive, have some surplus, will be taxed accordingly to cover the needs of the State.

4.Two important clarifications are necessary at this point.
a) by referring to land, lands, locations, plots etc, we mean the surface of the land alone, without considering any improvements such as buildings, fences, crops, wells, mines or anything else. Nothing but the dry, solid surface of the Earth.

Any improvements of any kind on the surface or below it are to be considered as – and indeed are a form of – capital, or products of human labour; such works therefore must not be taken into consideration when evaluating the land in a particular location.

Estate agents know and can easily tell apart the value of the land from the value of any building or crops that exist on it. For example, it is often the case that a construction company will buy a plot of land with one or more buildings, only to demolish them so as to erect a new building; the price that was paid for was the price for the land alone.

The value of land everywhere can easily be made known. Making a few necessary phone calls or sending a couple of emails, estate valuers, estate agents and anyone interested, may learn the current value of a plot of land per acre in the countryside, or per square metre in the city for all the locations of the nation.

b) Real estate tax in Greece is calculated not according to the market value, but a supposedly “objective” value that is set by the state – with the latter, especially during the financial crisis, often being much higher than the market value. Such forms of tax reveal confusion and deep ignorance, since they fail to distinguish between the land alone and any improvements on or below it (buildings, crops, mines etc).

5. All sorts of economists in our days are part of a truly baffling class of people. They know better, being aware of the existence of this wholly different system of taxation and mention it in all reliable textbooks; sometimes even in their public talks. Yet, they do not promote it: they do not lobby nor do they advise governments to apply it and to abolish current irrational tax practices.

From Adam Smith’s Wealth of Nationsand all the classics, all the way to the meta-classical and modern economists, such as Nobel laureates M. Friedman and J. Stiglitz, they all declare that taxing economic rent (or collecting the public values) is a particularly beneficial form of taxation, which does not cause any negative side-effects on the economy. This was mentioned on the previous article, Tax Reform – Part I ,§8.

a) Let’s begin with Smith wrote: “Both ground-rents, and the ordinary rent of land, are a species of revenue which the owner, in many cases, enjoys without any care or attention of his own. Though a part of this revenue should be taken from him in order to defray the expenses of the state, no discouragement will thereby be given to any sort of industry.The annual produce of the land and labour of the society, the real wealth and revenue of the great body of the people, might be the same after such a tax as before. Ground-rents, and the ordinary rent of land, are therefore, perhaps, the species of revenue which can best bear to have a peculiar tax imposed upon them.”

(Adam Smith. “An Inquiry into the Nature and Causes of the Wealth of Nations”).

b) David Ricardo also put it clearly, in different words, when he wrote that a tax on economic rent would only affect the surplus. It would burden the landowners alone and would not be transferred to another class of consumer (The Principles of Political Economy,London, 1978, Everyman, chapters 10,12 and 14). What Ricardo is saying here is that no landowner is able to alter the rent of the land he is letting, since everyone is aware of the value of the location in relation to other locations and its difference from the marginal areas. Since they would have to pay any surplus in the form of taxation, keeping the land out of use would be at a loss.

The most important consequence is that the additional cost which one finds in modern conditions, (i.e. the rent that a business pays to the landowner) would not, therefore, be rolled over to the prices of the product and therefore will not contribute toward inflation.

c) In his Communist Manifesto (1848), the first often measures Marx postulates (part2) toward establishing the new socialist regime is to abolishland ownership and use the economic rent to cover government expenditure.

Since all of the economic rent would go over to the state, absolute land ownership (excluding buildings or other works) ceases to exist!

6. Let us look at some of the post-classical writers.

a) The acclaimed J. Shumpeter wrote “And obvious wisdom is in fact what George said in Progress and Poverty (ch. 1, Book IX) about the economic effects to be expected from a removal of fiscal burdens” (History of Economic Analysis, 1950, Oxford).

b) Paul Samuelson wrote that taxing the economic rent, that is the automatic increase of the land-values, is natural surplus that can be taxed without discouraging motives for production or distorting the the efficiency of the entire system (Economics,1973 McGraw-Hill, Inc.: part 4, ch 28).

The increase of value) of the land is plain to see and, compared to other prices on the construction sector in the graph that follows, where the land values in the USA increased by about 2000% within the space of a few years.

Such is the increase. It is owed to the fact that the population and demand for land are both increasing, while the amount of land does not; moreover, there is an increase and improvement in state services (healthcare, education etc), public infrastructure (roads, bridges, lighting, water services etc) and cultural events (theatre, music, dance etc). The landowners had absolutely nothing to do with these yet they reap the profits from the ever-increasing values!

c) A. Skouras from Greece wrote: “Taxing land is a most advantageous and beneficial form of taxation” (Land and its Taxation…PhD at LSE London 1975).

d) H. Speight writes in his own textbook that the main fault of most tax-systems is “they tend to distort production …A tax on the economic rent would have no such effect. It is therefoe the ideal tax” !!! (Economics: The Science of Prices and Incomes London, 1965: p 277.)

Friedman said( HumanEvents18/11/1978, p 14.): «In one sense all taxes antagonize free economy… the least harmful one is the tax on thevalue of unimproved land.»

Stiglitz (former member of the Finance advisory committee under the Clinton administration) “Land-value taxation not only is not distorting but is the only tax necessary tofinance public services …” (A.Atkinson& J.Stiglitz, 1980 LecturesonPublicEconomics, London, McGraw: p 524)

Stiglitz explains how the State should collect the economic rent and not spend above that revenue! Rent from land constitutes state revenue and the State must make due with that alone.

7.This new system has at least 12 advantages: