I do not know what I may appear to the world, but to myself I seem to have been only like a boy playing on the seashore, and diverting myself in now and then finding a smoother pebble or a prettier shell than ordinary, whilst the great ocean of truth lay all undiscovered before me.

Isaac Newton (1643-1727) is depicted in the picture above performing what turned out to be a ‘crucial’ experiment out of many he performed with light, and which eventually led to the formulation of his New Theory of Light and the publication of his treatise Optiks in 1703.

The “crucial” experiment involves a dark room with a single source of light, such as a window. The experimenter holds a prism to the sunlight, and directs the refracted light through a small aperture onto a screen. The screen now is hosting a Spectrum; a ghostly band of the colours of the rainbow, named after its spectral, or ghostly character. The screen hosting the spectrum has a small hole as well, which allows only one of the colours to go through. That single-coloured ray then passes through a second prism and is projected onto a second screen. The observation is that this single-coloured ray does not undergo further colour change by the second prism. The experimenter can repeat this experiment by changing the position of the hole on the first screen, so as to test each of the other colours through the second prism. The observation is that a single-coloured ray will not undergo further change in colour by the second prism. This, according to Newton, demonstrates that a prism bends each colour uniquely – each bent ray has a one-to-one correspondence with a single colour.

Newton used these results to argue that white light is, in fact, composed of all the colours of the rainbow, and that a prism reveals this fact by virtue of its ability to bend each colour by a unique amount.

Isaac Newton was not the only one to chase spectres in the dark. Joseph von Fraunhofer (1787-1816) was a German physicist and lens maker. One of his inventions was the spectroscope, an apparatus which allowed for the closer study of spectra. A spectroscope is an instrument which essentially performs the first part of Isaac Newton’s crucial experiment. It resolves light from a source into its constituent colours.

Fraunhofer’s instrument allowed him to discover that the solar spectrum is not actually a continuous band of colours, like the one given off by a candle;  the solar spectrum is broken by dark lines which exist at specific locations. It was as if parts of what should have been a continuous spectrum had gone missing. These lines were very characteristic and only existed on light coming from the Sun. He thought that perhaps there was something in the Sun that was absorbing those parts of the light, which is why this type of spectrum is called today an absorption spectrum.

Fraunhofer’s research led him to become interested in all sources of light, including that from the planets. He used his spectroscope to resolve light coming from the known planets in our Solar System. The light from those planets also turned out to have dark lines; moreover, the planetary spectra were identical to that of the Sun. Fraunhofer had demonstrated that planets do not emit their own light – they simply reflect sunlight.

Curious to see whether other stars had similar spectra like the Sun, he used his spectroscope to resolve light coming from other stars in the night sky. To his astonishment, he discovered that stars also had parts of their own spectrum missing, just like the Sun did, only it seemed that the individual patterns were different to that of the Sun. It was as if each star had its own characteristic “spectral fingerprint”.

Fraunhofer solved the mystery of the “missing ghosts” during another experiment that involved his spectroscope. He was interested to resolve the light coming from the combustion of substances. The spectra from the combustion of gases turns out to be different than that of the Sun or the stars. It consisted of a series of bright lines on a dark background. It was as if a substance would only give off specific colours of light when burnt.

As he was burning sodium over a flame, two parallel bright yellow lines appeared among others. But these two specifically somehow looked familiar to him. In a flash of genius, he realised that those two very characteristic bright lines were an exact match to two dark lines that where missing from the solar spectrum. This observation inspired the suggestion that perhaps all missing lines could be matched to known elements. Could it be that elements were responsible for absorbing part of the spectrum ?

Fraunhofer sadly died from tuberculosis before he could complete his study of spectra at the age of 39. Two other scientists, working in the University of Heidelberg, picked up the baton where Fraunhofer had left: Robert Bunsen (yes, the Bunsen burner is his) and Gustav Kirchoff. They studied the spectra of combusting elements and discovered that each element had its own characteristic fingerprint of spectral lines. Moreover, when a cool gas made of atoms of that element were placed in front of a source of white light, the gas absorbed exactly the same parts of the spectrum as it would emit when it combusted. The mystery of the missing stellar spectra had been solved.

The answer was that the missing dark lines corresponded to elements that were present in stellar atmospheres. Those elements absorbed light coming from deep within the stars. One could identify the chemical composition of a star from the missing lines present in its spectrum. Helium was discovered on the Sun (and named after our star Helios Gr; ‘Sun’) before it was detected on the Earth by virtue of its spectral lines. Fraunhofer, Kirchhoff and Bunsen set the foundation which led to the birth of modern Astrophysics.

In a wonderful activity created through the EU-Hands-on-Universe project, students have the opportunity to make their own spectroscope using simple materials. It offers a budget version using cd covers as a diffraction grating, but I find that it is worthwhile ordering some cheap diffraction gratings for better results.

A cardboard tube serves as the main part of the spectroscope. On one end, one has to create a tiny slit (the activity suggests using a razor blade but if there are health and safety concerns, that can easily be replaced by painting microscope slides with thick dark paint and carefully scratching off a neat column to serve as a slit). On the other end of the spectroscope, a diffraction grating has to be placed. The two elements are secured onto the cardboard using dark electric tape. 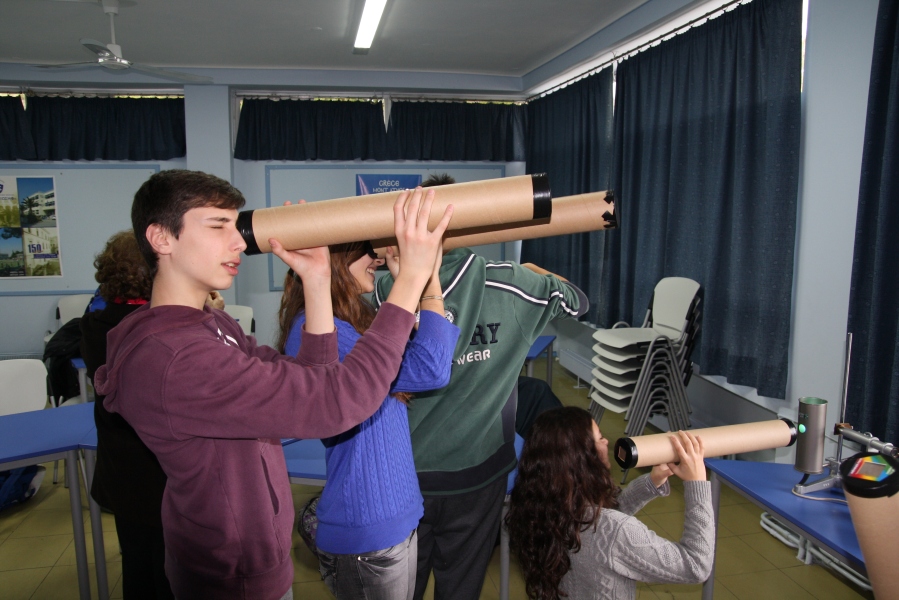 The students can then observe the spectra from a variety of sources. The lamps on the ceiling; light from a discharge tube; candlelight; sunlight; light from the combustion of some simple chemicals, such as table salt and from some elements. They record their observations and compare them.

A carefully made spectroscope will give the results shown above. And the best thing is that students can take the spectroscope home and share their amazement, perhaps chasing some spectres in the dark of their own…!

“It will reward enough for me if, by the publication of the present experiment, I have directed the attention of investigators to this subject, which still promises much for physical optics and appears to open a new field.”

(what an understatement this turned out to be!)